There are not many October festivals in Sapporo Japan. Probably because it rains a lot in October and it starts to get very cold. However, one of the great things about this city is that there is always something going on all year round. The Sapporo Autumn Fest is relatively new and the first one started in 2008, but it has grown and become more popular every year.

I remember going to the first Autumn Fest back then. It was only a week long and covered two blocks of Odori Park. Now it’s two weeks long and covers five blocks of the Park. Before you know it, it will be an entire month long and will cover the whole Park, just like the Sapporo Beer Festival in the summer. You heard it here first! 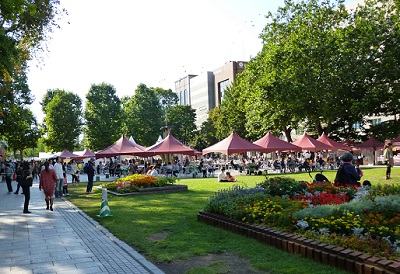 The weather in September is perfect for the festival. Not too cold with temperatures averaging around 17 degrees celcius and sunny most days with blue skies, so a thin jacket will suffice. Every time I come here the weather is always "chodo ii" (just right). Actually this mid autumn festival maybe one of the only October Festivals (it finishes at the beginning of October) in Sapporo.

Autumn Fest has a great, lively atmosphere and it’s always busy, even during the weekdays when most people are at work. Then at the weekends it gets crazy busy but still pleasant enough to enjoy some food, drink and music. The great thing about this festival is the food. Most of the food stalls showcase famous and popular Japan food from Hokkaido such as ramen (Japanese noodles in soup) , jingusukan (barbecued lamb), soup curry, soba (buckwheat noodles) and more all made with fresh Hokkaido produce and grown locally so it’s a really nice way to support the local economy. There really is just soooo much to choose from. I was completely overwhelmed with the choices on offer. It really is difficult to make a decision when there are five stalls lined next to each other selling the same thing. 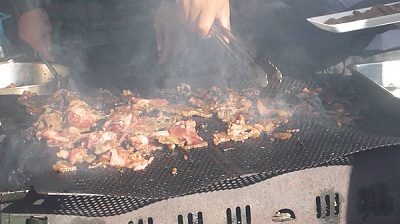 As with all festival food, it can be quite expensive for what you get so it’s better to at least buy something that tastes good. Obviously not all the food is going to be great as a lot of the places have hired help rather than professional cooks to make the food. Remember, they are there to make money. And because of the small portions it’s easy to spend a lot of money very quickly. Choose wisely.

There is also a block that sells international foods and is filled with stalls of local international restaurants. Here you’ll find Indian, Chinese, Italian, Spanish and more. The Indian food is always filling because they give you a huge naan bread, but they are a bit skimpy on the meat. The somosas are really good. Yum yum! I also had a doner kebab. 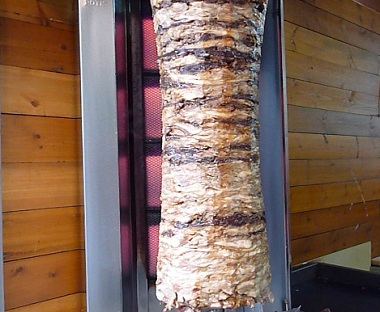 In 6 chome (block 6) there is also a stage where they have live performances from local bands and students, all amateurs and for free. There is a schedule next to the stage but obviously most of the acts will be on the weekends. Large dance groups of attractive youngsters busting moves to the latest pop tunes seems to top the bill here. Grab a table with your bowl of noodles and enjoy the sounds of the locals.

The Autumn Fest is one of the only October festivals in Sapporo starting from the middle of September until the beginning of October.

Open from 12pm until 9pm everyday.

From Sapporo Station you can take the subway to Odori Station, the next stop. One way costs 200 yen. Alternatively you can walk above or underground which takes about 15 minutes. I recommend walking.

Autumn is a beautiful time in Hokkaido with many places to watch koyo (leaves changing colour). The Japanese love to drive out to places and have drinking parties under the trees and take lots of photos. The Koyo season starts in the middle of September at the North of Hokkaido and works its way slowly southward down through Japan and the last red leaves can be seen at the end of November. Beautiful red and orange leaves can still be seen in early December in the most southern parts of Japan. There is usually a very small window to see koyo(about a week) unless you follow the koyo path southward through Japan! A great place to see koyo is at the Hokkaido University campus grounds.