Sapporo Beer! Almost a month long drinking session in the beautiful Odori park bang smack in the heart of the city. Asahi beer, Kirin beer, Suntory beer, they are all here! Everyday from early afternoon until about 10pm.

This is definitely my favourite festival of the year. I have always had a great time drinking in the summer heat and meeting many a drunk Japanese person. It never ceases to amaze me how civilized and friendly the people are. There is no security, no trouble and it feels very safe. If this kind of drinking festival were to be held in my home country of England, all hell would break loose!

It has changed slightly over the years since I have been here. In 2008, my first beer garden experience, we were allowed to sit on the grass and drink and the place closed at 10pm. In 2014, the grass areas had been sectioned off to prevent people from gathering there. This sucked royally, because it made it much more difficult to find a table. Someone would have to come early and "hold" seats. It was truly ridiculous. I once saw one guy at about 5pm hold 20 seats and nobody turned up until 7pm! The holding of seats seems to tolerated in this country. Also, closing time was 9pm with lights out on the dot. I'm not particulary happy with these changes, but the beer garden is still good fun. Lets just hope they add on more restrictions in the coming years.

Getting to Sapporo Beer festival

You can fly there in two hours by plane from Tokyo, Haneda Airport, and there are direct internal flights from most major Japanese cities to Sapporo, Chitose Airport. Flight tickets range from 8000-15000 JPY one-way. You can get some really cheap flights by using low-cost carriers.

From Chitose Airport take a JR train direct to Sapporo in under an hour.

There are also overnight sleeper trains from Tokyo and Osaka which depart daily. Sapporo can also be reached by day on the train.

The journey of just over 700 miles takes approximately 10-12 hours with a single change at Hachinohe in northern Honshu. I definitely recommend flying. Its much cheaper and faster.

Please DO NOT get the festival confused with the Bier Garten. The Beer Garten is a Sapporo restaurant where they serve Jingis khan(barbecued meat) accompanied by beer, of course. 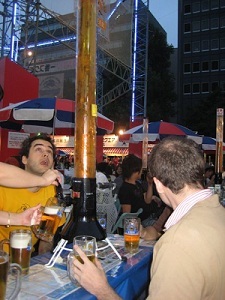 The infamous Bikuri tower in the Kirin block.

Make sure to head to the Kirin block where they have the infamous 'Bikuri Tower'('surprise tower') a 4 feet tall, 3 litre pitcher of beer! The Kirin block is also the most lively mainly filled with youngsters. It's not uncommon to see "cool" dudes walking around trying to find some girls to drink with. I'm a bit too old for that these days and prefer to drink in the a little less lively Asahi block, where the clientele tend to be in their late 20's to early 30's. The area is mainly covered with trees, so it's the most visually appealing and, more importantly, the driest place for when a burst of rain hits.