Play Japanese beer games at Norbesa beer garden. This is a great lively place to continue your drinking party in the summer. It especially makes a perfect second destination after the Sapporo Beer Garden in Odori Park. It’s opened from June and closes in early September, so that’s about three months of boozing outside……awesome!

The beer garden is situated on the roof of Norbesa building in Susukino, right under a ferris wheel. There are two beer gardens there, one is called Club Beer Garden and the other is called The Terrace Beer Garden. The Club Beer Garden is bigger, has longer tables so that larger parties can be accommodated for, and there is also a stage at the front for performances and beer games. Usually there is a singer or small band playing. Most of the clientele are young, loud attractive people so there is a carnival like atmosphere and people are very friendly and would often chat to nearby people. 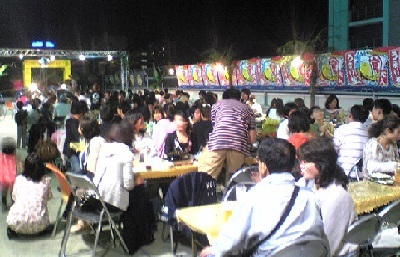 They also have random drinking competitions on the front stage for the customers. My friend entered and absolutely demolished everyone. He won 100 packs of instant noodles! On the weekends pretty cheerleaders from the bar next door do a little song and dance to promote their bar. Then they walk around giving flyers and chatting to punters being very friendly and even try to speak English. 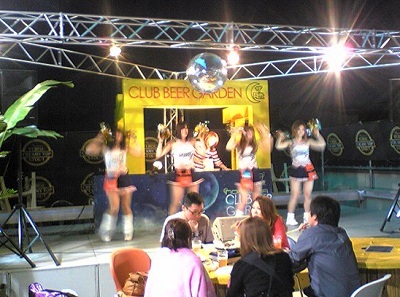 Both beer gardens have nomihodai (all you can drink) plans for 2000 yen for 100 minutes and tabenomihodai (all you can drink and eat) plans for 4000 yen for 100 minutes. The food is jingusukan, (barbecued lamb) which you cook yourself at your table, a very popular Hokkaido food. I recommend the Sapporo Beer Garten, a popular Sapporo restaurant that specialises in this delicious dish.

You also have the option of “tanpinde” (ordering by the drink) at 500 yen a drink. The menu consists of one Sapporo Beer and a few cocktails such as high balls or whiskey sodas. It’s not much of drink menu but people don’t come here for the drinks.

If you want to party and meet some Japanese people head to the Club Beer Garden. When you come out of the elevator turn right, instead of left. There are some great Japanese beer games that we played with some random strangers that definitely broke the ice.

Everyone sits in a circle and one person points at someone and says “senda”, then the person who got pointed at points at another person and say “mitsuo”. The two people on either side of that person have to say “naha naha” whilst raising both hands twice to the side of their heads. The person who is too slow to say “naha naha” or if someone goes out of turn has to drink. This is a fast and funny game and requires good concentration. I kept losing because it was at the end of our nomihodai plan!

Sorry, I can’t remember the Japanese name. Another one of those good, simple drinking beer games which can be played in any language. Depending on how many people there are in the group determines how many numbers should be called. Everyone in the game puts their hands together, like in prayer. One person in the group randomly raises their hands above their head while calling out “ichi” (one). This person is out of the game. Then another random person repeats the action but calls out “ni!” (two) and is also out of the game. This continues in number sequence. The last person left who hasn’t called out a number or if people call out numbers at the same time must drink. This game is fast and is about timing and balls.

Look up for a huge ferris wheel on top of a building. That’s Norebesa. You can’t miss it. Call for large parties, you can just walk in and otherwise you will be able to find a space. From Sapporo Station it’s about a 20 minute walk, or you can take a subway to Odori or Susukino station and its about a 10 minute walk. August is the best time to go to play beer games. 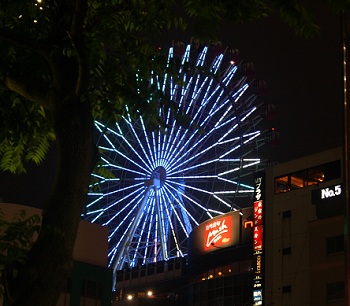