The Rising Sun hosts Japanese rock music in Ezo (Ezo is Hokkaido in Ainu language)and is held every summer at a special outdoor site; Tarukawa Wharf of Ishikari bay new port, only about 40 minutes by car or bus from Sapporo JR station. The festival is usually around August 12th or 13th and always on a Friday and finishes on the Sunday morning, just after sun rise, hence, the name of the festival.

Compared to rock festivals around Japan such as Fuji Rock or Summer Sonic, this is a bit smaller and cheaper. Not surprisingly really, as most of the bands are only big in Japan, but some years they may get international stars performing. 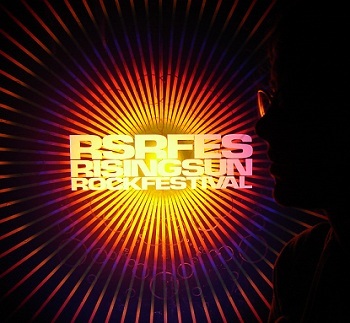 One of the years I went, DJ Krush performed, and although he is known world wide, it seemed a lot of Japanese (especially my friends) had never heard of him. Maybe it’s because he doesn’t perform in Japan very often.

I have been to this festival a couple of times and it has a very friendly, lively atmosphere. There is only j-music at the festival so if you are thinking of going, you should do some research of Japanese bands that are going and that you might like to see. Although it is a rock festival, there are also other kinds of music on show on the seven stages, from jazz to hip hop to dance.

I’m not a huge fan of Japanese rock music, so I preferred the smaller stages where the more obscure, rare music from Japanese or Ainu folk bands could be found. The stages were much more intimate as you could get really close to the stage and really feel part of the show. Unlike, the main stage where the barrier is quite far from the stage so it’s difficult to see the performers unless you are right at the front. 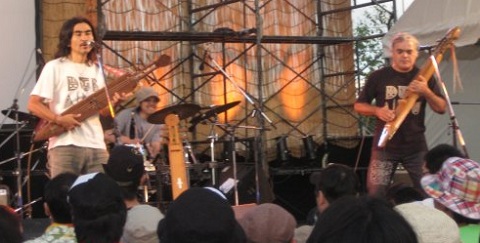 This is Oki Dub Ainu, an Ainu band that sings in Ainu. Not really Japanese rock music but very lively and funky and was one of the highlights of the festival for me.

The Japanese really know how to camp. They bring EVERYTHING; gazebos, tables, huge grills, kegs of beer, deck chairs...the kitchen sink. Basically everything they need so that they are as comfortable as being in their own houses. So efficient. Then, everyone just sits outside their “camp” and barbecues and drinks all day in the beautiful sun with the bands playing in the background. It really is a nice way to spend an afternoon. We weren’t so well prepared and only brought a small tent and sleeping bag for the weekend. 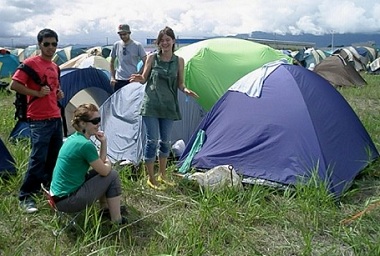 We went for the cheapest camping site and it was outside the main stage areas so we had to walk about 20 minutes outside of the main site (a huge pain at night) every time we needed to go back to the tent. Take my advice, pay a bit more money and get a spot near the music stages. Then you can rest, listen to all the Japanese rock music you like and still be in the thick of everything.

Everyone that goes to this festival wears some pretty funky stuff and all the guys carry around a small towel that they usually wrap around their necks or their heads, bandana style. A great idea for when it’s hot and you can get the towel wet and cool yourself down. Also, it looks pretty cool. 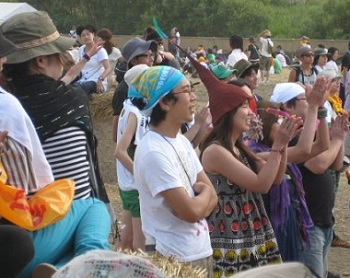 I’m not sure if the crowds are the same at other Japanese rock music festivals, but the crowds at Rising Sun were definitely very different compared to those at British festivals. When bands were playing everyone did the same action as everyone else. For instance, everyone pumped their right arm into the air in unison and as soon as the majority stops, everyone stops. If the bands were not well known, then there was usually very little or no reaction from the crowd, at all. But, when there is a big, famous performer, it’s a different story.

One other thing with the crowds at Rising Sun is that when a band was performing they were very quiet during the show, even during the intervals between songs. I remember seeing Shina Ringo one year at the main stage. She was the headliner and hugely popular. During her set everyone was dead silent. In between songs when she was saying a few words I started talking to my friend, in my regular tone, and someone in front turned round and gave us the dirtiest look like we were being rude or something. You really need to experience it to believe it.

People only sleep the first night of the festival and then on the second day the music continues all day and night. It’s a bit of challenge to stay awake until sunrise.

Some people take a nap, which usually helps, or you can stay drinking the whole time, but I remember feeling really spacey during the last set of the festival because I got drunk, had a nap, then woke up just before sunrise, hanging out of my……… 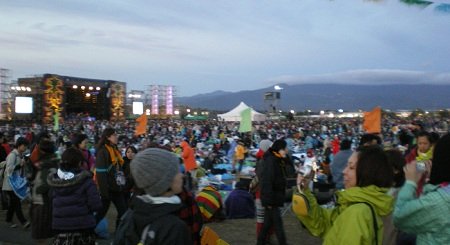 If you like Japanese rock music you will love the Rising Sun Rock Festival. Rock on!

Tickets go on general sale in June but they can also be pre ordered in March.

Located at Tarukawa Wharf of Ishikari bay new port. From JR Sapporo Station take the Namboku subway line (green) to Asabu. The cost is 240 yen one way and takes about 10 minutes. From Asabu station bus terminal there is a shuttle bus that takes you directly to the festival site. The fee is 600 yen for adults, 300 yen for children (7-12 years old) one way and free for children under 7 years old and takes about 30 minutes.

Driving takes approximately 40 minutes from JR Sapporo Station. Parking tickets are 2000 yen per car. You have free access to the parking lot during the festival (except for 3am -9am on the last day to avoid crowding).

People who live nearby or would like some extra exercise can ride a bike there. There is a free parking area for bikes and motor cycles. The festival site and car park for cars and bikes close at 12 noon on the last day of the festival.

from Japanese Rock Music to Best of Sapporo home