The best bars and food joints in Sapporo Japan? Buddy Buddy is definitely way up there on the list. Very conveniently located next to Sapporo Station and always lively and vibrant. This is the place I go to with a group of people. 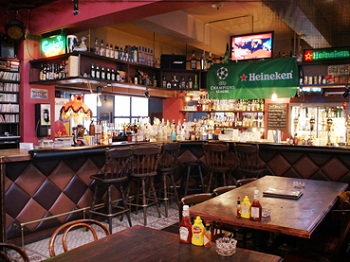 It is not a Japanese Bar, but a bar designed with an American theme. No American bar tenders though, just Japanese. The owner loves New Orleans and Jazz music so much that he decided to make a bar like it. He designed the bar himself. The kind of crowd you get here is a bit more mature and refined, usually people in their 30s or 40s who like good music.....and hats.

The staff are very friendly and speak some English too. 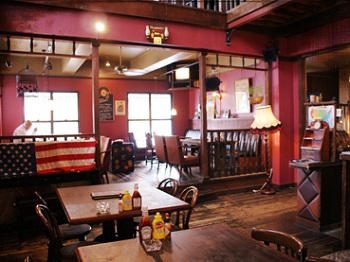 The bar is very large and open on two floors. In total there are about four sections to the bar. Downstairs is the main drinking area where they also sometimes host live acts. Usually it's jazz or blues music by artists from all over Japan, so if you're into that kind of thing, this is one of the bars and food joints you should defintely check out when you are in Sapporo. They have a live act about once a month.

Upstairs is a bit more relaxed and quieter with leather sofas and arm chairs. And then there's another bar on the second floor. This is usually where the locals hang out(and the owner).

He recently renovated the upstairs bar and installed sound proof walls so that he can host live acts there too.The last time I went, there was a wedding reception going on downstairs and a live act upstairs. With the doors closed you would never have been able to tell that there was a live band playing....stealth! 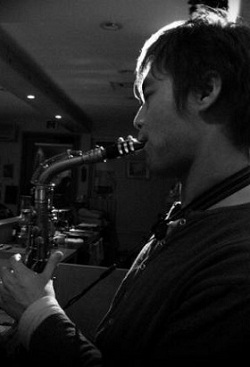 This is the sax player of a jazz band called 4 colors who have played there a few times. There are four members...evidently.

They charge an entry fee on these nights which range from 500 yen to 3000 yen depending on who is playing and how many acts there are, but they usually include some deal like a free drink or something. On their anniversary party, which lasts a few days, they usually have a variety of bands, cheap drinks and cheap food. This is well worth the entrance fee. Call the bar on the number at the bottom of this page to find out schedules for the Live Acts.

The bar drinks start from about 500 yen and upwards and the New Orleans style food is good. I always order the Poor Boy sandwich(fried fish in a baguette with chips on the side) which costs about 850 yen.

Buddy Buddy is located at North 2 East 1, right on the side of the main road so you can't miss it. From Sapporo Station it takes about 10 minutes on foot. 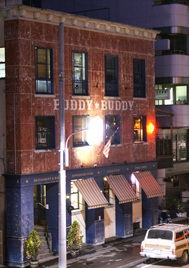 This was also a great place for watching the World Cup. For the World Cup 2010 in South Africa, the bar cleared out all the chairs and tables in the main room on the first floor and installed a huge screen. When the Japan games were on, the bar got packed and the atmosphere was amazing. At that time I almost got caught up in the excitement of the fans and wanted to support Japan. After England got knocked out (typical), I did.