This was the main ski jump used in the 1972 Winter Olympics. I've never been to or seen a ski jump (except on TV) before so when I heard there was one in Sapporo I had to check it out. I wasn't disappointed. You can actually experience the same view the ski jumping atheltes see when they are sitting on the plank waiting to fly. If you want to give it a go yourself, you have to be a member of a ski jumping team or join a high school team! 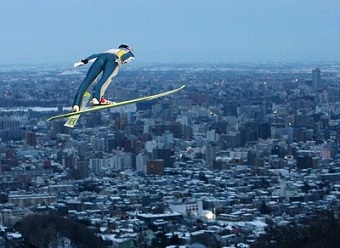 It is still used today as a training facility for Nordic events, so if there isn't a major event going on, you can see athletes including high school kids flying off the hill.

The Okurayama Observatory can be reached by chairlift which costs 500 Yen roundtrip and opens at 8.30am until the early evening.

The views of Sapporo Japan from the summit are amazing where you will also be able to see the Ishikari Plains and Japan mountains including the nearby Mt. Moiwa.

There is also the Sapporo Winter Sports Museum (admission charge 600 Yen, 0900-1800) at the bottom of the ski jump which is a well worth the visit, especially the ski jump simulator. Avoid it if you have a full stomach. You have been warned!

Take the Tozai (orange line) subway line to Maruyama Koen station. From there take the JR bus No. 14 bound for Miyanomori Kyogijyo (5-10 minutes ride, 2 buses per hour) and get off at Okurayama Kyogijyo Iriguchi. From the bus stop it's a 10 minute walk.

On weekends and public holidays take bus No. 15 from Maruyama Koen station directly to the base of the Okurayama Ski Jump

By taxi it would cost about 1200 Yen from Maruyama Koen station.

from 1972 Winter Olympics to Sapporo Japan

from 1972 Winter Olympics to Sapporo Homepage